Since the early 1700’s this uniquely American beast is said to be unlike any other animal ever witnessed. Indeed, as described over the past few centuries it more closely resembles an animal steeped in mythological legend than a biological species of a similar living creature or something from the fossil record of extinct life.

So what exactly is the Jersey Devil? Its safe to say that no one really knows for sure but there are many people who have allegedly encountered this “thing” and maintain that it is not something they would ever want to meet again! Some say it is a bad omen to sight the creature and that disasters of all kinds follow shortly after an encounter, but that can be said of anything if one makes a strong enough case. Superstition and occult beliefs are the roots to the legend of the Jersey Devil from the beginning with one Mother Leeds blamed for giving it birth.

The story is an old one but round the year 1735, Mrs. Leeds the mother of twelve children already was in the act of giving birth to her thirteenth when she cried out, “l tire of these children…let the devil take this one!” What followed this curse was the newborn, a healthy normal boy, suddenly transforming into a terrifying creature associated with a denizen from the pits of Hell. No longer human, Mother Leeds’ 13th Child was an abomination, a creature with an elongated body and tail, a distorted horse-like head with horns, a pair of large bat wings, cleft hoofs at the ends of kangaroo-like legs and a body covered in scaly patterns and patches of dark fur. There are variations to the descriptions and the overall size of the beast but regardless of differing accounts, people all claim to have seen a monster!

Of course many explanations as to what the Jersey Devil might be involve the mistaken identity of local wildlife such as the Whooping Crane, an Owl and even a Black Bear! Many say its just folklore carried down over the years to scare the kiddies and confuse the ignorant. Not exactly a scientific explanation is it? Whatever it is, it can be labeled an unknown species and falls firmly into the ranks of Cryptozoology and is now a most welcome addition to the growing “Crypto Legends” line.

The physical depiction of the creature is based on dozens of documented eyewitness descriptions and incorporate the most recurring of described bodily features.

He is presented in a marshy environment similar to many areas that I have visited within the New Jersey Pine Barrens which feature: a rotted-out tree stump with exposed roots, mounds of eroded soil, scattered pine cones, a decomposing log, a still water surface and also a startled frog to help establish the scale of the scene.

The parts breakdown is as follows:

Once fully assembled the model including base stands 11” tall. The base at it’s widest is 9 3/16” and is decorated with various names by which this creature is known by locals throughout the state and also includes the “Crypto Legends” logo and the sculptor’s signature 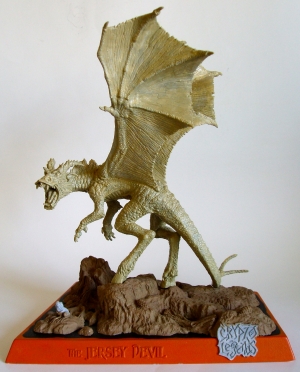