​In the high Himalayan Mountains there are legends dating back for centuries of hairy wild men that dwell somewhere in the secluded upper regions away from most areas occupied by man. Seldom seen by the local folk but respected and feared as a creature both savage and unpredictable that some say have killed full grown yak bare-handedly and will at times carry off livestock and an occasional woman or child. The people of Nepal and Tibet and many other locations along this immense mountain range refer to this beast as the Yeti, though there are several other names given it. Around the world it had become known by another name, the Abominable Snowman.

Expeditions to Mount Everest have found evidence of something unusual in the area that has left footprints along the snow covered landscape. Some have claimed to having seen a dark solitary figure traversing the slopes where no man should be. Eyewitnesses describe a man-like being, walking upright on two legs and usually covered from head to foot with dark hair. Often it is said to be much larger than a grown man, sometimes several feet taller and the tracks found may actually support this. Still the footprints could very well have been left by a known animal native to the area and the prints could have been distorted by melt and freeze caused by the sun and wind.

But what if they were indeed left by an un-cataloged species of near-human? An ape or ape-like creature that may have gone undetected is not entirely impossible and the fossil record leaves evidence of a very large prehistoric ape christened Gigantopithecus that may have once dwelled in this vicinity. It is presumed to have been the largest primate to have ever lived and is considered by scientists to be long extinct. Could then a branch of this creature have survived into our modern era? Possibly it has adapted to it’s environment much better than human-beings could under the same conditions and has managed to stay alive and keep it’s numbers small enough to generally stay undetected. Truly if a specimen were ever captured it would spell the beginning of decline of the species as I feel no hesitation in predicting.

If the Yeti do exist, they have done so without man’s interference and may continue to survive if left to their own devices. With this said I have long been fascinated with the idea that the Abominable Snowman may be a living creature and immediately placed him in the “Crypto Legends” bestiary.

So here after careful consideration of countless documented eyewitness accounts, claimed physical evidence and historical folklore I present my interpretation of the Yeti. This is the second entry into the series of mystery animals filed under Cryptozoology.

About the model kit:

The Abominable Snowman is depicted as an adult male of the species standing well over eight feet tall and walking with an effortless gate upon the snow covered rocky outcroppings of the Himalayan countryside. A footprint marks his passing and partially obscured by a drift in the snow is a string of Tibetan prayer beads frozen to the rock. The kit is composed of five separate hand-cast resin parts as follows: base, torso with both legs and back of head and lower jaw, face, right arm and left arm.

Assembled the model stands 11” tall with the base being 10” wide in the front view. The sub-base has various names by which the beast is known embossed on three sides along with the “Crypto Legends” logo and the sculptor’s signature as well. 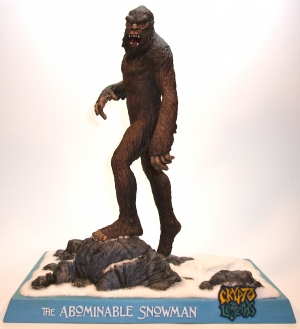